There is a scene in the final series of The West Wing where pollster Joey Lucas and Josh Lyneham, heading the campaign for Democratic candidate Matt Santos, explain how daddy-track and mummy-track campaign messaging works to junior staff.

JOEY: All this attention on the leak story, it’s magnifying the inevitable “Mommy Problem”.

JOSH: When voters want a national daddy…someone to be tough and strong and defend the country, they vote Republican. When they want a mommy, someone to give them jobs, health care…the policy equivalent of motzah ball soup, they vote Democratic.

As most politically engaged Australians noticed last month, Malcolm Turnbull was trying out yet another slogan when he ‘advised’ the Governor General to recall parliament. His strategy was designed to turn around his flagging popularity and take back the agenda from the Opposition, who had been releasing policy initiatives rather than sloganeering and backflipping. The grand announcement was classic daddy-track messaging and received accordingly by the predictable cheer squad in the mainstream press.

While conformist journalists praised the announcement as bold and Turnbullesque, Turnbull took to the airwaves to sell his paternalistic brand. He hectored and waffled about why the taxpayer should continue to subsidise the fourth and seventh investment properties of wealthy Australians. He spelt out the double dissolution election provisions in our constitution to senior journalists more patronisingly than the way I teach the same provisions to first year law students. It was squirmingly embarrassing and confirmed a long-noted view of Turnbull: he has terrible judgement.

And throughout these appearances, Turnbull kept repeating his new mantra, ‘continuity and change’.

Of course the punters in my corner of the twittersphere were onto it immediately. Another three-word slogan, we scoffed. Listen to Big Mal now hoho he has well and truly caught the three-word disease, said we. Oh so it’s continuity and change now is it. How much more sophisticated than Stop the Boats… wait. No. It is utterly meaningless.

I do not know who first googled the phrase and found it on the side of a fictional campaign bus from a US comedy series. Certainly Mark DiStephano over at Buzzfeed was one of the first to tweet it out. The show itself, VEEP, even bought into the ensuing hilarity and confirmed the slogan was grounded in meaninglessness, which seems apt enough. 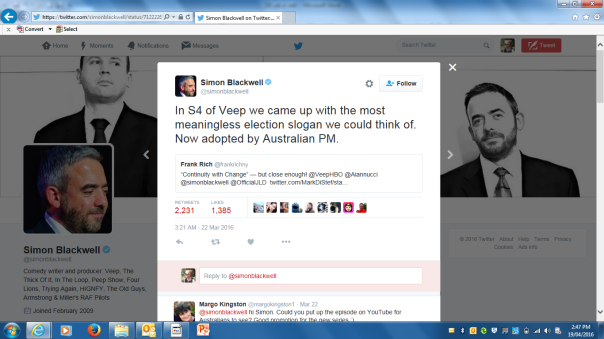 But all of this is old news and, outside social media, generally poo-pooed by commentators and punters who take themselves oh-so-seriously. You know the ones. They claim Twitter is a hive mind of manufactured outrage and adopt other pompous positions when their perceived seniority is threatened by new media, or millennials, or affordable degrees, or whatever it is that made the scared weird little guys feel scared and weird and little today.

Fast forward to 16 April, and at a completely unnecessary cost of millions, the Australian parliament has been elaborately prorogued with much ushering of black rods and what-not. Pomp and circumstance, sit down as I tell you this, are adored by conservatives. Nothing appeals more to the bunyip aristocracy than the archaic rituals of the colonial-imperial power.

Pomp and circumstance wells the conservative heart. Ushers of black rods and what-not remind them of ‘traditional values’ like shouting ‘neutrality! That’s our thing shut up! Only we can say what is neutral!’ while using and abusing ritual and tradition for cheap and grasping political ends such as desperately trying to stay in power while falling behind in the all-important opinion polls.

In the same way, Coalition politicians use state power to extend ever-greater control over the citizenry – or specific groups of citizens, such as welfare recipients – while claiming to be the party of ‘small government’. Cashless welfare is not small government, nor are control orders or data retention, or billions spent to torture asylum seekers. This is big-taxing, big-spending, huge-control-over-human-lives government. Yet they persist with the lies of liberalism, because that is the preferred method of neoliberalism. It is all around us, yet invisible, like air – and like air, neoliberal politicians would have us believe that their power is inevitable and natural. It is not.

So has bold daddy Mal called on the Governor General to issue the writs for his double dissolution election on 2 July 2016 yet? No. The Australian parliament had nothing to do once it was recalled at massive expense and the Senate rejected the ABCC bill as per a simple phone call or news feed could have told anyone.

So in a predictably fractious and dreary, repetitive question time, Turnbull then told the Australian parliament that he will wait until after the budget.

This, the Prime Minister lectured us patronisingly, is in accordance with convention.

But the issue for the people is whether the electoral process, the constitution and conventions, the Governor General and the law, are being used for political ends by the Prime Minister in a bid to retain government.

The problem is this. The recall of parliament was done in the proper fashion, by letter from the Prime Minister to the Governor General, which Turnbull assured Cosgrove was legally backed by his Attorney General. You know the one – a QC who can not open the second tab on spreadsheets.

In the small print was a claim that the ABCC bill was so important as to warrant the recall of parliament because the government ‘believes’ that among other things the ABCC will boost productivity.

Obviously the government can believe any old thing it likes – and does, such as the meritocracy mythology that cloaks its every attack on the poor. However, this claim not only has no factual basis, it has been comprehensively disproved by economics professors at Griffith University.

The belief in a positive relationship between the ABCC and productivity began life as an error in an Econotech consultant report commissioned by a former Coalition Prime Minister who also had a notoriously loose relationship with the truth.

The falsity of the productivity and other claims, made by the Prime Minister for the ABCC to the Governor General, have been tracked by Crikey here and The Guardian here and New Matilda here. Among others. There is no doubt whatsoever that the government’s “belief” is a false belief. Not just lacking evidence but founded in – ahem – error (that’s the polite term). A known falsity that has been comprehensively disproved, a mistake that has been corrected by experts. Whatever, the claim is demonstrably false. Turnbull is lying.

There are those who would dismiss the fact that Turnbull is lying as mere politics, say hey, all politicians are liars. Sure. Both these responses are a reasonable reading of the situation.

But here is the problem. The Governor General cited the Prime Ministerial reasons for requesting that he recall Parliament in the Parliament, during the pomp and circumstance of proroguing the Parliament. His speech included the false claims regarding productivity, claims that the Productivity Commission has ‘distanced itself from’ in ‘unusually strong terms’.

The conservative position on this highly questionable speech by the GG is to shout convention! The speech contradicts any suggestion that the GG is above politics and the conservative response is to shout shut up! Neutrality! Only we can pronounce on what is neutral! It is the GG, and thus it must be neutral! That is how the GG or neutrality or convention or whatever suits us works!

Whether it is in the grand tradition of liberal democracy to politicise supposedly neutral offices, or for the head of state to mislead the parliament, is obviously up for debate. I would tend towards a yes stance here. We are talking about a system of government that simultaneously produced the doctrine of separation of powers while making the highest court in the empire a subset of an unelected upper house comprised of landed gentry. This is neither liberal nor democratic and it certainly indicates that nothing is above politics or immune from the power of incumbency.

Either way, the facts remain. The Prime Minister has relied on disproven claims for a belief he says the government holds. He has politicised the office of the Governor General. He has upheld the longstanding tradition of deploying the power of incumbency for personal political ambition. He has shouted convention! Tradition! Neutrality! Shut up! To anyone who points out these blatantly obvious facts.

The next day, Turnbull was citing his ‘strong expectation’ there will be a double dissolution election on 2 July 2016, and maybe there will be. But what’s that Skip? Strong, you say? Is he a big strong man in contrast to that wishy washy opposition? Like a big daddy sort of thing?

The next day, the concerns of the commentariat became the ‘risks’ for the Prime Minister and his strategy – risks that Turnbull imposed on himself. Recall this grandiose double dissolution announcement – once he had secured Senate voting reforms favourable to his party – was hailed as a bold constitutional manoeuvre, nay, Turnbullesque.

Here is what that adjective means: to say or do anything for power, no matter how narcissistic or false, no matter what abuse of incumbency and voting reforms and politicisation of a supposedly neutral institution. And above all else: to desperately project a public image of competent masculinity, while in the backrooms an unruly family of spoilt brats squabble among themselves.

4 thoughts on “Daddy track messaging: More Turnbull strategy from a US television series”